Spoilers ahoy! And yes, there’s going to be a paperback collecting all of Mega-City Two; it comes out in August. 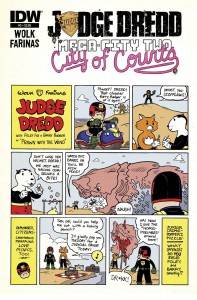 The epigraph in the original script for this issue comes from Jean Baudrillard: “Disneyland is presented as imaginary in order to make us believe that the rest is real, whereas all of Los Angeles and the America that surrounds it are no longer real, but belong to the hyperreal order and to the order of simulation.” (The issue’s title is from Baudrillard, too.)

I still crack up over “And you’re here to see Mr. Di Crimelord?”

Pp. 2-3: I am unduly proud of this little song (whose rhyme scheme is very Gilbert and Sullivan, but I also imagine Barry singing his lines in a kind of Bugs Bunny-ish outer-borough accent)–there’s a lot of exposition I managed to get in there. The “Grandpa was a bandit” bit is my private joke about Walt Disney’s explanation of the design of Main Street U.S.A. (“For those of us who remember the carefree time it recreates, Main Street will bring back happy memories. For younger visitors, it is an adventure in turning back the calendar to the days of grandfather’s youth.”)

We’ve seen a couple of lawless entertainment enclaves before in Judge Dredd–there’s the Las Vegas sequence in “The Cursed Earth,” and the floating pleasure island of “Sin City” (which, come to think of it, actually has its own theme song too). This is a very, very cynical take on anarchism; while several of my favorite comics writers ever, particularly comics writers named Alan, are enthusiastic and eloquent proponents of it, I fear I can’t quite go there myself.

Ulises and Ryan, of course, knock this so far out of the park it was last seen somewhere around Enceladus. Love that late-night neon lighting.

Pg. 5: And the alien in the tube!! Di Crimelord’s dialogue took a couple of passes to get up to Scooby-Doo-level corniness; ditto for Dredd’s dialogue, which had to sound kind of like him but observably out of character. Plus we know that that’s really not what the friendly bullets do…

Pg. 6: The clean T-shirt that Caples changes into was an inspired bit of improvisation from Ulises; if you look at the first issue, the Dahlias’ van has a “Black Dahlia” logo on it (because I’d written “the black Dahlia van” in the script). So he decided that Black Dahlia was the equivalent of, say, Fox Searchlight. Also inspired: Barry and Foley constantly changing their shapes to riff on whatever’s happening, throughout the issue.

It’s officially called “Melody Time,” not “Crimeland.” They don’t like that nickname there.

Pg. 8: Santos–name, costume and everything–was Ulises’ invention: he sent me a text one day with a sketch he’d done, and it took about twelve minutes for Santos’ backstory and his role in Mega-City Two to click into place for me. Then I went back and snuck a reference to him into #1, just so we could set up his appearance as early as possible. Nice entry line he’s got, too. And the “animated” style for this and the other interludes in this issue makes me ridiculously happy.

Pg. 10: Oh, right, the big secret that Dredd’s been keeping through this whole story so far? It’s so not a secret that Santos just spells it out for him. Also, some people will take advantage of lawlessness to do anything that’s normally illegal. Like “seditious lectures.”

“Patos Locos”–seen again on the final page–is the greatest possible name for a gang in Melody Time, and is Ulises’ joke.

Pg. 11: The Rusty Bitcoin is like the one bit of chicken fat in this issue that I came up with; everything else is Ulises. “F.L.A.M.E. protocol”: I needed something that would indicate that Santos really was a Judge by training; this is a reference not to anything from the Dredd canon but to my own very limited experience with a peacekeeping force.

Ulises was itching to draw a Mk. I Lawgiver, and I figured out how one could tie this issue’s plot together, but that meant I had to explain what one does. Fortunately, Barry and Foley are only too happy to jump in with exposition whenever it’s needed. Or not needed.

Pg. 12: Foley also provides relevant sound effects whenever he gets the opportunity, because, well, “Foley.” Hence the “Wilhelm”/”Howie” joke.

Pg. 13: The return of Rap Rex from the cover of #1! Dredd’s not doing too well at preserving whatever goodwill he’s built up with Santos, is he.

Pg. 14: There are all sorts of San Andreas Fault jokes that could be made, but the faultline doesn’t actually get triggered until “Judgement Day”…

Pg. 15: I’m weirdly proud of having slipped the “lady’s hat” line in here.

Pg. 16: Oh, man, are we finally going to find out what the deal is with Cesar?!… Well, a little of it. (Especially when Barry and Foley play Cesar and Kennedy in panel 3.) One of my favorite John Wagner moves ever is one he pulls off in “Day of Chaos”: introduce new characters, make it clear that they’re in a position to explain the plot, and then kill them before they get a chance to do so… the final rhyming sound effect in Barry and Foley’s “Stagger Lee”-esque song is a direct homage to the “Apocalypso” routine in “The Apocalypse War.”

Pp. 18-19: This was the trickiest formal experiment of the whole series, really–a big fight scene, translated in (almost) real time to the happy-fun cartoon idiom of Melody Time and its associated values, except that Barry gets shot before the “inventivator engines” can convert the last few lines of dialogue. (“Cokey Candy” was one of Ulises’ inventions from the first issue.) I’m delighted by how Ulises and Ryan pulled it off. I also managed to get the lost Dredd-universe oath “Oh my dok!” in there; happy about that, too.

Pg. 20: Slump’s henchman is so creepy. And man, that last panel.

Pg. 21: Right, so what I was saying about how much I love John Wagner’s trick of killing characters just as they’re about to explain the plot? That again. It takes a while for “old-fashioned riot gel” to melt (riot foam is “new” as of “Brainblooms,” which happens five years after this story, but let’s just say the gel is an older technology). By the time we get outside again, it’s daylight…

Pg. 22: And yet another indignity has been visited on Dredd’s car. Kennedy is looking over some of the early installations for Lawcon, which we’ll see a lot more of next time; what’s in the background behind him is the evolution of MC2’s Judge uniform.

This is the hitting-rock-bottom moment of the story. As tough as he talks, Dredd has basically been doing nothing but reacting for this entire issue–aside from the opening Di Crimelord routine, where he’s acting in the sense of reciting a script–and for the climactic sequence, he is literally paralyzed, unable to do anything, while the crucial confrontation is happening in front of him. When he surrenders control of how he’s represented, everything immediately goes straight to hell. But this is also how he’s learning how the game is played in MC2.