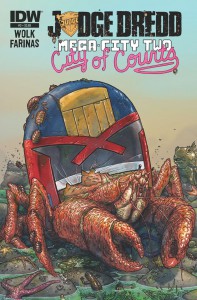 Spoilers ahead! And now I can reveal why I didn’t post notes on the first issue here: they’re being reserved for the Director’s Cut of the first issue that’s coming out in June!

I probably tried to compress more stuff into this issue than any other, despite its relatively relaxed tone–my initial notes were all about California’s ecology, its cult of physical beauty, and its discourse around immigration, and then I tried to figure out where they could overlap.

Pg. 1: I like the idea that Dredd and Slater are just trying to keep their arrest numbers up while they’re hanging out at the shore. Dredd’s being significantly more polite than usual here (“ma’am”!); maybe he’s still being thrown off a little by the cameras.

Pp. 2-3: Ulises and Ryan killing it again. Ryan colored the woman in the foreground as the splendid Jen Vaughn, who helped us read the first issue at Comics Underground a few weeks ago.

Pg. 4: In the earliest iteration of the proposal, the giant shrimp was a shark, just because I thought it’d be fun to do some kind of Hook Jaw riff. Then I realized that anybody can fight a shark, but if I wanted something really gross, it should be another form of sea life. I believe it was partly the shrimp that sold Ulises on the Mega-City Two pitch, so that worked out nicely. Did you know that shrimp don’t have mouths as such but “mouthparts”? Eeeeee. 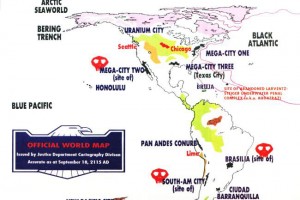 If you gotta have exposition, you might as well try to make it funny, I say. The Blue Pacific is identified as such in the map of Dredd’s world that ran in 2000 AD in 1993; as well as being a nice counterpart to John Wagner and Alan Grant’s brilliant idea of the Black Atlantic, the name made me think of the Blue Lagoon in Iceland, whose gorgeous waters are pretty much the color Ryan gives them here, because of the dead algae in them. (There’s even a line of Blue Lagoon beauty products; supposedly, that stuff is good for the skin.)

Pg. 5: Ulises, trollin’ (and the person he’s trolling isn’t Geof Darrow). The scrawler is starting to write “JUSTICE FOR CESAR”–of whom we’ll hear a bit more later (and who was mentioned for the first time on the cover to #1!).

The “fines” routine: In MC1, punishments seem to mostly involve incarceration, but that’s expensive (as Al Ewing’s “The Bean Counter” points out). MC2’s mutable laws jail its poorer citizens, but in relatively wealthy areas, where violent crime isn’t as much of an issue, they’re designed to keep money flowing back to city government, which is awfully expensive; the infrastructure of getting water everywhere inland it needs to go practically breaks the budget by itself (and it’s not exactly cheap in present-day California).

Pg. 6: I mean, MC2 can’t be all traffic, especially on its fringes. I love Ulises’ design for whichever MC1 building that is (probably the Grand Hall) in 2094: eagle-shaped, with lots of windows…

“Double Nickels,” besides being a movie title, is a riff on Minutemen’s album Double Nickels on the Dime–as great a record, and as great a title, as has ever come out of Southern California’s punk scene. The Minutemen were, specifically, from San Pedro, and that’s where I figure Double Nickels is (see last issue’s line about the “old anchorage” there).

Pg. 7: “I see you like to steer” was a late addition–we’d established in the first issue that using steering wheels was optional, but Ulises put the little dash-cam in, so I let Kennedy remind Dredd that he’s being surveilled, even while he’s having his conversations with Goodman.

When Ulises came up with the roadbots, he worked out a bunch of stuff about their habitats and tidepool ecology; the cloverleaves-to-nowhere, built out of reprocessed garbage and extending into the ocean, are his stroke of genius, and they might be my favorite thing about this issue.

Pg. 8: Sometimes, there’s no way to adequately explain stuff without bogging the story down, so you just have to sprinkle a few clues and let things roll. The idea behind Checkpoint Bardot (whose name echoes “bardo” as well as Brigitte) is that MC2’s economy depends heavily on the movie/vid industry, and the only way for most people to immigrate there is to land a role. So waves of asylum-seekers land at the checkpoints for open casting calls; you get one shot at “auditioning” for citizenship. Roles can be exceptionally dangerous, especially for extras–as we mentioned briefly in #1, the vogue is for “authentic cinema,” with real actors and no special effects, so even blockbusters are made Dogme 95-style (rules 6 and 8 notwithstanding). Most of the refugees who arrive at the checkpoints are hoping to trade up to possible doom from certain doom, basically.

Uranium City, by the way, is a real place, and also the setting for the Dredd spinoff series Harmony.

Pg. 9: I can’t get over how perfectly Ulises pulled off the Kahlista.

Pg. 12: There’s a great bit in (SoCal author and musician) Rob Roberge’s novel “More Than They Could Chew”: “You can get through life with just two lines: I don’t know and You’re talking to the wrong guy/gal.”

Pg. 13: Yep, (near-)certain doom. I’ve been known to grouse about stuffed animals as symbols of betrayed innocence in comics, but I cracked up at the Barry Badger plushie here.

Pg. 14: We’ve been seeing references to Santos since the beginning, but now we’re starting to flesh out who he is and what he represents. Foreshadowing! Excellent literary device! Will be used more later! “Oz” is the Australian Mega-City (as seen in the long Dredd storyline of the same name).

Pp. 15-16: I love how airy Ulises and Ryan made this scene. They can do crazy detail, obviously, but they also give our setting a real sense of openness.

Pg. 17: Five-panel page as originally written, ten-panel page as ingeniously restaged by Mr. Farinas. Saints after whom hospitals are named in John Wagner’s Dredd stories include Doris Day and Melvyn Bragg, among others.

Pg. 19: Robots have their own priorities. I tried to sneak references to every previous Dredd-universe story that showed bits of pre-“Judgment Day” Mega-City Two into this miniseries somewhere; StigCorp figured prominently in the Chopper storylines Song of the Surfer and Earth, Wind and Fire, and Mimsey comes from Dave Stone’s Dredd novel Wetworks. (Ursus is Ulises’ invention from #1.)

Yeah, Dredd’s come a long way from dressing down Cadena in #1 to concurring with her suggestion here…

Pg. 20: …which is not to say that he’s entirely into playing to the cameras now.

Pg. 21: Tight boots are one thing, but waterlogged tight boots are just a drag to wear. Great, great page, visually speaking, which has already been analyzed in some depth by Loser City. (And another instance of the artists drastically improving on what was in the script.)

Pg. 22: Another smart move from Ulises: the kid getting cuffed here is the one we saw earlier. He’s also pointed out that the cover of #4 acts as a bonus strip for #3… the gags in the final panel, from the Amazing Spider-Man #50 homage to the “Rodney’s Last Ride” with a 187 license plate to the Coney Island-style panopticon, are all his. You know, for all the artists he gets compared to, I don’t think many people mention Will Elder…

See you in a few weeks for #4. And do you think we’d take you to a place called Melody Time without bursting into song a few times? If so, rethink that.